All About Books, Short Stories, Snap Malek Books, This and That 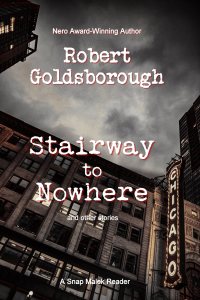 Between 2005 and 2010, I was privileged to publish, through Echelon Press, five mystery novels featuring Steve “Snap” Malek, a police reporter for the Chicago Tribune, which happens to be an old employer of mine. These books, set in Chicago between 1938 and 1949, chronicle Malek’s adventures while investigating murders, and in the process, he runs into both fictional characters and famous people of the era. These legends include Al Capone, actress Helen Hayes, baseball star Dizzy Dean, architect Frank Lloyd Wright, nuclear physicist Enrico Fermi, President Harry Truman, ill-starred carmaker Preston Tucker, and Walt Disney.

Now, after a gap of seven years, I have published another Malek volume, “Stairway to Nowhere, A Snap Malek Reader.” It consists of the title novella plus five shorter Malek stories. “Stairway” itself takes place in the Chicago of the mid-20th century and is set against a racially changing district on the city’s sprawling South Side. Like my previous Malek stories, this fictional tale also brings in some historical characters, including a famous black preacher of the era. “Stairway to Nowhere” is available through Amazon, as are my five previous Malek books: “Three Strikes You’re Dead”; “Shadow of the Bomb”; “A Death in Pilsen”; “A President in Peril”; and “Terror at the Fair.”

16 thoughts on “Stairway to Nowhere Release”