I was a police reporter only for a brief spell at the beginning of a journalism career that spanned 44 years, but it was long enough to create a permanent impression of the experience that enabled me to develop police reporter-protagonist Steve “Snap” Malek.

My five Malek mysteries from Echelon Press are set in Chicago between 1938 and 1949 and are set against the backdrop of real events, among them the Chicago Cubs’ classic 1938 pennant race, the early work on the atomic bomb at the University of Chicago in 1942, the tragic Naperville, IL. train wreck of 1946, and the historic 1948 presidential campaign between Harry Truman and Thomas E. Dewey.

Now my brief time as a police reporter took place in 1959, well after the time frame of the Malek stories, but the Chicago of the late ’50s was little changed from the two preceding decades. In my books, I felt comfortable describing the sprawling city, the newspaper business, and the police department that existed in a slightly earlier time.

Malek, who possesses what other describe as “essential brashness,” is not intimidated by coming in contact with these and other well-known figures, which is one of the hallmarks of newspaper reporters. To them, famous persons are useful because the help make the story headline-worthy.

Blog Posts, Celebrity Spotlights, This and That 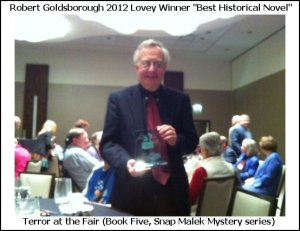 As the publisher of the Snap Malek series, I am thrilled and honored to announce that at the Love is Murder 2012 Conference, Robert Goldsborough accepted the Lovey Award for “Best Historical Novel” for book five in the Malek series, Terror at the Fair.

As a long-time fan of Robert Goldsborough’s wonderful additions to the Nero Wolfe series created by Rex Stout, it was more than a thrill to put Bob’s original historical mystery series into print, and each one in the series since. Snap Malek quickly became one of my favorite characters in the historical mystery genre, earning a place next to Nero Wolfe on the podium in my mind.

When we first published Three Strikes You’re Dead, nothing could have pleased us more than being there when Bob won the Lovey Award that year at Love is Murder for “Best Historical Novel.” What this tells me is that  Robert Goldsborough has definitely got what it takes to tell entertaining stories and to create unforgettable characters. It would appear that mystery readers agree with me on that.

Congratulations to Robert for this latest honor, and I, for one, look forward to many more outstanding novels written by this acclaimed author.

With great pride and respect,

Celebrity Spotlights, This and That

In Praise of John Nettles

If, after reading the headline, your reaction is “Who Is John Nettles?” you cannot call yourself a fan of television detectives, particularly the British version. In terms of longevity, Nettles is the reigning champion of TV detectives by a wide margin. For 13 seasons, he has portrayed Chief Detective Inspector Tom Barnaby in the series “Midsomer Murders,” episodes of which are regularly telecast on Public Broadcasting stations throughout the U.S.

The series, adapted from the books of Caroline Graham (born 1931), is set in England’s fictitious Midsomer County, with most of the filming done in picturesque rural and small-town Buckinghamshire. Nettles portrays a calm, clear-eyed and happily married detective who remains unrattled as the deaths pile up all around him in the unlikely bucolic settings.

In his Barnaby role, Nettles appeared in 81 “Midsomer” episodes, far surpassing the late, great Jeremy Brett’s 41 episodes as Sherlock Holmes from 1984 to 1994. Nettles, 67, made his final Barnaby episodes earlier this year. During his long tenure as Barnaby, he had three different sergeants as his sidekicks. Jane Wymark played Barnaby’s wife, Joyce, in all 81 episodes, stoically putting up with him upsetting the family schedule by dashing off to a case in mid-meal or during a stage play in which their daughter is performing.

Although Nettles is departing, “Midsomer Murders” will continue. New episodes, filming this year, feature Neil Dudgeon as Detective John Barnaby, Tom’s cousin. It will be interesting to see how he is received by viewers.

I was delighted to learn that Helen Hayes, arguably the finest American actress of the Twentieth Century, recently got honored by being pictured on the latest “anytime”U.S. postage stamp, now on sale nationwide for 44 cents and usable for first-class postage at any future rate from now on. Miss Hayes, dubbed “The First Lady of the American Theater,” died in 1993 at 92. She was the only performer to win the show business “grand slam” of Oscar, Tony, Emmy, and Grammy.

She became the first stage actress to win an Oscar, for her role in “The Sin of Madelon Claudet” in 1932. She won her second Oscar 38 years later for her supporting role in the 1970 film “Airport.”

What particularly pleases me about this recent honor is that Helen Hayes appeared in my first “Snap Malek” Chicago historical mystery novel, “Three Strikes You’re Dead,” from Echelon Press. I set that story in 1938 and found in my research that Miss Hayes happened to be in Chicago that year in the long-running stage drama “Victoria Regina,” in which she portrayed QueenVictoria over a half-century span. Every evening, the actress aged fifty years over the duration of the performance. 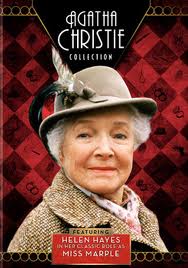 In my book, I had Malek, a Chicago Tribune police reporter, introduce himself to Miss Hayes in a restaurant, and the two of them ended up talking about the newspaper business, a natural topic since the actress was married to journalist Charles MacArthur, who with Ben Hecht co-wrote the famous newspaper stage play “The Front Page.”

That fictional meeting between Malek and Helen Hayes remains my favorite scene in the book. And the great actress will be in my thoughts once more later this month, when I attend a revival performance of “The Front Page” at a theater inChicago. 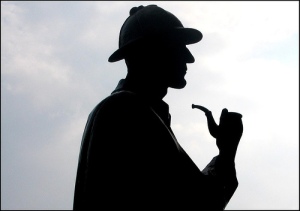 “Where was Sherlock Holmes when we needed him?” A St. Petersburg, Russia, police officer spoke these unlikely words recently after a bizarre crime with eerie echoes of a 120-year-old Holmes short story by Sir Arthur Conan Doyle.

Here’s what police surmise happened, according to London’s Daily Mail newspaper: Thieves paid a 74-year-old St. Petersburg woman to stay out of her flat for an extended period. While she was gone, they broke through her walls to get into the jewelry store next door. Although a burglar alarm went off twice after the break-in, security guards treated it as a false alarm because the doors remained locked and the windows untouched. 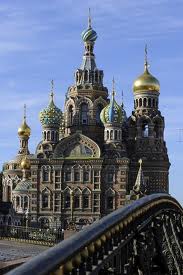 St. Petersburg police believe the thieves tricked the Russian woman in exactly the same way as a shopkeeper whose store adjoined a jewelry store in Conan Doyle’s story “The Red-Headed League,” which first appeared in the August 1891 issue of Strand Magazine and was one of 12 stories comprising “The Adventures of Sherlock Holmes,” published the next year. In that story, Holmes apprehended the thieves.

The Russian burglars, apparently conversant with the Holmes canon, made off with hundreds of gold and silver valuables. They remain at large.

When I talk about my Snap Malek Chicago historical mysteries to book clubs, schools, and service groups (e.g. Rotary), the real-life character in these novels I get asked most often about is Al Capone. I find this interesting, given that Capone’s rule of the Chicago crime syndicate was so brief.

Indeed, Capone’s fame is far out of proportion to his tenure as the Windy City’s mafia kingpin. He reigned over its underworld for barely six years before being sent to prison for tax evasion in 1931 at the age of 32. He never again was a major factor in organized crime.

In all, Capone spent more time behind bars then he did as the head of the Chicago syndicate. And his successor, Frank Nitti, although primarily a front man for Tony Accardo and Paul Ricca, led the local mob longer than Scarface Al did.

So what drew attention to Capone? He was flamboyant, colorful, and quotable. The newspapers ate up his act. He outlandishly suggested he was a modern-day “Robin Hood,” taking from the rich and giving to the poor. He wore bright colored dress shirts and was a highly visible figure around town, patronizing the best restaurants and getting the best seats to big-league baseball games. And Hollywood loved the Capone persona. More than a dozen actors portrayed him on film, including Rod Steiger, Jason Robards, Ben Gazzara, and Robert DeNiro.

The man’s fast and loose living caught up with him, even in prison. Suffering from syphilis and with his mind deteriorating, Al Capone was paroled from the federal penitentiary at Alcatraz in 1939. He spent his last years in Florida, little more than a vegetable, and died in Miami Beach on Jan. 24, 1949, a week after his forty-eighth birthday.

Few things have delighted me more of late than to learn that my favorite bookstore, Centuries & Sleuths, has won a 2011 Raven Award from the Mystery Writers of America. The Raven is given annually for outstanding achievement in the mystery field outside the realm of creative writing, and C&S is joined in this year’s award by Once Upon a Crime in Minneapolis.

Centuries & Sleuths, specializing in mystery, history and biography, is located on a lively and eclectic retail stretch of Madison Street in Chicago’s near-western suburb of Forest Park and is run by August Paul Aleksy, known widely as just Augie. The store, which Augie founded 20 years ago, is a gathering place for mystery and history writers and aficionados. (Full disclosure: The store has sold more than 1,200 copies, collectively, of my four “Snap” Malek Chicago mystery novels.)

Battling as all indies do against the national bookstore chains as well as e-books, big box discount retailers, and Amazon.com, Augie more than holds his own by providing personal service and a cozy, welcoming and stimulating retreat both for authors and readers.

For instance, every month the 1,200-sq. ft. store hosts meetings of the local chapters of Mystery Writers of America, Sisters in Crime, and the G.K. Chesterton Society, as well as mystery and history discussion groups. Also, the store is the scene of an annual “Meeting of the Minds” panel discussion, in which professional and amateur actors portray historical figures.

Then there are the author signings—more than 30 annually. Among those who have discussed their work and inked their books at Augie’s including celebrities Peter Ustinov and Steve Allen, as well as a Who’s Who of mystery writers, historians, and biographers of the last two decades.

Join me in raising a glass to Augie Aleksy and Centuries & Sleuths!